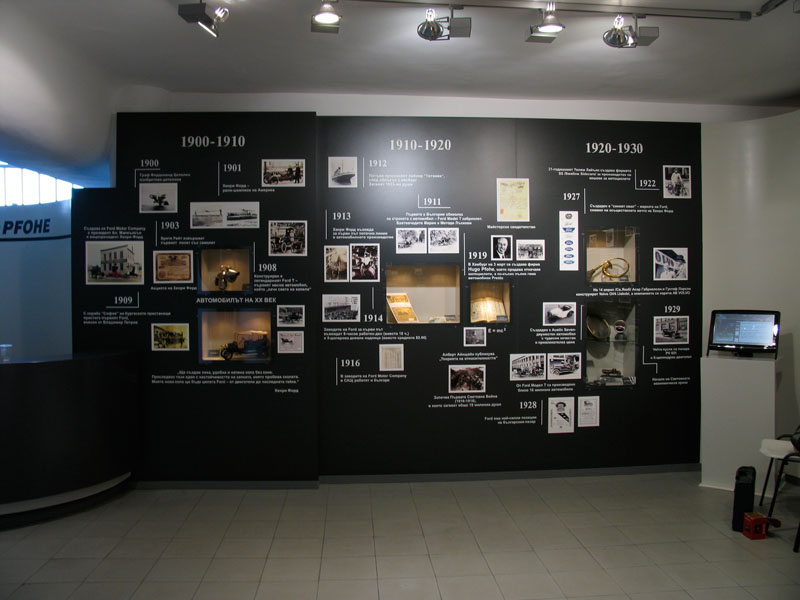 Moto-Pfohe has been the founder of the 1st private museum exposition in Bulgaria. On May 14th, 1998 was established the permanent exposition “Ford and Bulgaria”, situated at the Moto-Pfohe head office in Liulin district, Sofia. At that time it has been the only of its kind outside The Henry Ford Museum in Green Village, Detroit, the USA.

Moto-Pfohe museum exposition from 1998 displayed interesting and curios
information about the development and endorsement of FORD in Bulgaria since 1911, when the 1st Ford vehicle was imported in our country. A special part covered the life and success of Henry Ford, an icon of a self-made man, who has been voted Automotive Entrepreneur of the 20th Century and his Model T – Car of the century.

A new Automotive Timeline exposition opened in the Lulin company complex, Sofia, on the occasion of the 20thanniversary of Moto-Pfohe. Replacing the displays from 1998, now it follows the decades of development of the automobile since 1862. Special attention is dedicated to the four brands, represented by Moto-Pfohe in Bulgaria – Ford, Volvo, Jaguar, Land Rover, as well as to the history of Moto-Pfohe itself and the mother company Hugo Pfohe, Germany.

The big accents of Moto-Pfohe museum exposition are three vehicles – two fully restored Ford Model A vehicles MY1928 and 1930, as well as the first car sold in Bulgaria by Mr. Karl-Heinz Pfohe in 1989, a Ford Scorpio MY1988.

Just as before the exposition area is a meeting point of many events – book premieres, art exhibitions etc., and hosts also guest exhibitions, connected with the history of human transportation and cars from ancient times till the industrial presence.

You can visit our web museum anytime museum.motopfohe.bg